Start the new year by enjoying two iconic Austrian/German sweets: The Mozartkugel, conceived by confectioner Paul Fuerst as the Original Mozart Bonbon in Salzburg in the early 1890s;  and Original German Haribo Gummy Bears, produced in Bonn since the 1922.

The Gummy Bear is the creation of confectioner Hans Richter who invented this chewy treat in Bonn in the 1920. Soon his invention gained popularity all across the Rhineland and from there all over the world in the next 100 years. Today, Haribo produces gummy candies, licorice, chewy candy and marshmallow sweets in Turkey, Spain, Brazil and the US, but the German originals are still favored by many. The innovative "Make Your own Gummy Bears" Kit , produced in Halle, Germany, lets you create customized gummy bears

Reber’s Mozartkugeln – made with a hazelnut nougat core, surrounded by green pistachio and almond marzipan and covered in dark chocolate -are the world’s best-selling Mozart pralines with a daily production of 500,000 Kugel.It takes about 45 minutes from getting the ingredients ready to wrapping the finished ball into the foil to produce one Reber ball. Reber’s complete Mozart assortment includes heart-shaped marzipan pralines, dark and milk chocolate truffles, Black Forest cherry pralines, Mozartkugel in tins, piano-shaped and violin-shaped cases. You can find the complete US assortment in our store. Some products are only available between October and December. Both Reber’s Genuine Mozart Kugel (dark chocolate, 60% cocoa) and Constanze Mozart Kugel (milk chocolate, 33% cocoa) are certified kosher dairy (not Passover). Other Reber creations include Asbach Riesling brandy and Schladerer fruit brandy 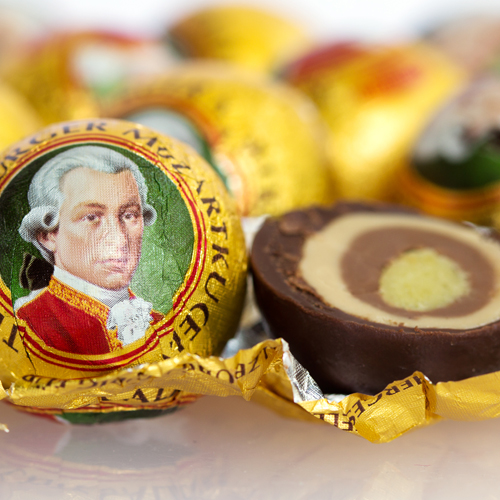 January is a great time to indulge in a Kugel or two. It's the birth month of the great composer. Forget after-holiday diet resolutions and and listen to one of Mozart's symphonies, along with a cup of tea and the kugel. Tired of the Kleine Nachtmusik?  Try Franz Schubert, Elvis Presley or listen to Nick Mason, the drummer of Pink Floyd. All are January's children. More to explore at